Floristic Quality Assessment (FQA) is a bioassessment method that uses characteristics of the plant community to derive an estimate of nativity or habitat quality (Swink and Wilhelm 1979, 1994).  FQA is based on the premise that individual plant species have evolved varying degrees of tolerance to disturbance or environmental stress (Odum 1985, Chapin 1991, Hobbs and Huenneke 1992), and exhibit varying levels of fidelity to specific habitat integrity (Herman et al. 1997, Mushet et al. 2002). This combination of tolerance and fidelity is expressed numerically as a coefficient of conservatism or C-value (Swink and Wilhelm 1979, 1994).

The C-value is a number between 0 and 10 assigned to individual plant species by a panel of experts with knowledge of the native flora of a particular region (Andreas and Lichvar 1995, Alix and Scribailo 1998, Nichols 2001). Plant species with high C-values typically occur in high quality habitats, while species with low C-values occur in a wide variety of conditions and generally are highly tolerant of disturbance (Wilhelm and Ladd 1988, Matthews 2003).

Some examples of taxa along the range of C values:

By its broadest definition, FQA encompasses a number of plant-based metrics (Taft et al. 1997). Most applications, however, have focused on the Floristic Quality Index (FQI), a metric the uses both the aggregate conservatism and species richness of the plant community to derive a measure of habitat condition or quality. The index is calculated according to the following equation (Swink and Wilhelm 1979, 1994):

Once FQI scores have been calculated, sites can be ranked by condition. This is typically done by regressing FQI scores against some measure of anthropogenic disturbance.  The resultant “dose-response curve” graphically depicts the relationship between plant community conservatism and disturbance and gives an estimate of habitat quality. 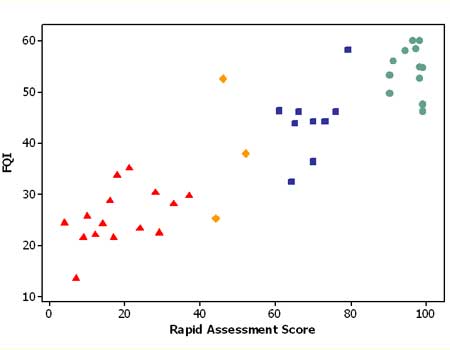 Dose-reponse curve for headwater floodplain wetlands in central Pennsylvania. By knowing the Rapid Assessment (disturbance) and FQI scores for each wetland, we can readily classify them into different categories of condition.

One of the products of the Mid-Atlantic Regional Floristic Quality Assessment Project was an interactive calculator to assist in determining FQA metrics. Use the following steps to determine the floristic quality of your site based on a plant list from the site. For the most accurate assessment of floristic quality, it is recommended that you have a comprehensive list of plants at your site prior to using the calculator.